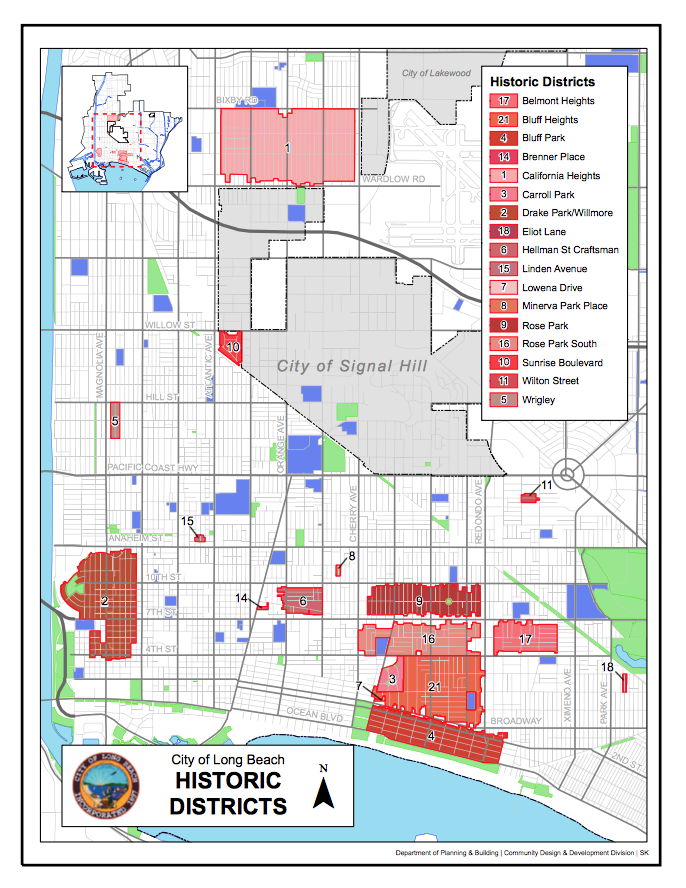 Historic districts are areas containing groups of older houses that are intact and unaltered. While each building may not be individually worthy of landmark status, collectively they preserve the visual qualities and ambiance of the past. Streetscape features, such as trees or light standards, may contribute to the historic value of the district.

A neighborhood of homes developed in the first decades of the 20th Century with some Victorian homes remaining. The Craftsman Bungalow style predominates with 2/3 of the homes in the area constructed in this style.

Other historic styles are Mission Revival, Spanish Colonial Revival, Tudor Revivial, and Neo-Traditional. The peak period of construction occured from 1918 to 1923, but the period of architectual significance is from 1905 to 1939. Back to Top

Adopted in 2004, the predominate architectural type in this district is the Craftsman Bungalow.

Intact Craftsman Bungalows constructed from approximately 1910-1923 are the single most prevalent type of home in the district. Back to Top

A residential neighborhood consisting of large, stately single-family and multi-large family houses constructed between 1903 and 1949.

Built by Mr. Steinbrenner in 1923, this group of Spanish Colonial Revival structures resembles courtyard housing. The visual unity and intimate scale create a unique charm reminiscent of a former era. Back to Top

Approved by the City in February 1990 and expanded in 2000, the City’s largest historic district consists of approximately 1500 properties, predominantly Spanish Colonial Revival homes constructed in the late 20s. A scattering of other styles, Craftsman Bungalows and Tudor Revival, may be found, including some homes moved here from other locations.

Curving streets lined with Craftsman Bungalows recall the horse-and-buggy era for this subdivision laid out in 1907. Landscaped islands are a unique neighborhood amenity.

Homes were constructed here between 1898 and 1923. Several old barns survive from an earlier time. Back to Top

This district unites two previously designated districts, Drake Park and Willmore City. The former is named for Colonel Charles Drake, who was a pioneer developer of Long Beach’s Pike and beachfront resort. Willmore City is named for William Willmore, who first laid out housing tracts for Willmore City, which was later renamed Long Beach.

Eliot Lane is a one block historic district with small-scale homes lining a narrow street that was originally called Eliot Court. The homes were all built in 1923 by a single builder, Boland & Smith, and represent an early subdivision of modest homes at a time of booming economic growth in the City.

All the original construction remains in place today. Architecturally, the Mission Revival style predominates, and points towards the future. Some of the homes are Craftsman in style, recalling a style that was passing out of favor. The street has unusual visual unity and cohesion, providing a snapshot of Long Beach in the twenties. Back to Top

An unusual cluster of four Chateauesque buildings constructed between 1919 and 1926 form a unique streetscape.

The street is named for the developer, H. N. Lowe, whose family owned a flower farm on this land from 1898. Back to Top

Minerva Park Place is a tiny street lined with sixteen Spanish Colonial Revival homes built at one time as a single project in 1925. The district’s charm and small scale is reminiscent of courtyard housing. Back to Top

This district contains more than 500 buildings, primarily Craftsman Bungalows constructed between 1910 -1922, with many variations in architectural design evident. Also significant are the Spanish Colonial Revival homes of the Twenties and Thirties, and Neo-Traditional designs of the Forties. Back to Top

This is a continuation of the Rose Park Historic District on the south side of 7th Street. The primary architectural style in the area is the Craftsman Bungalow. Back to Top

Originally a ranch, then a milk sanitarium, this neighborhood developed adjacent to the Pacific Electric Railway line. Homes are predominantly Craftsman Bungalows, constructed between 1908-1924, ranging from large mansions to small-scale workers’ housing.

An early motor court, the El Cortez, was built in the early Twenties on the site of the sanitarium; today, it provides small apartments. Back to Top

The Spanish Colonial/Mission Revival homes which create a highly unified streetscape were all built as one subdivision by a single builder in late 1924. They all share common architectural features, yet each one is individualized. The original character of the homes are remarkably intact, preserving the charm and ambience of an earlier time. Back to Top

Named for chewing gum magnate William S. Wrigley, Jr., developer of this two-block area, homes were built here in the Spanish Colonial Revival style between 1928 and 1934. The district has remarkable architectural consistency, unity and integrity. Back to Top